In Search of the Next Big Thing

Ariela Katzman-Jacobson, a 2016 graduate of Classical High School in Providence, R.I., is a participant on BINA Gap Year and will be attending Bard College in fall 2017. 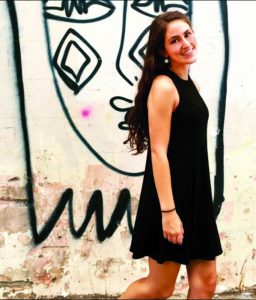 The plane ride to Israel tells you almost everything. You don’t even need to get off the plane to have a true Israeli experience.

First, you are lectured extensively about suspicious objects and persons (delaying the flight by at least an hour). Then, the older woman seated beside you spends half the flight trying to set you up with her grandson, and after only a few hours of sleep, you are awakened at sunrise to the shuffling of feet in prayer.

But when the plane lands, everyone claps and cheers and you find yourself joyfully embracing that woman beside you and agreeing to a Shabbat dinner invitation.

After spending the past two months on BINA’s gap year program, which partners with Masa Israel Journey, The Jewish Agency for Israel and the government of Israel, to provide transformative long-term Israel experiences for young people across all areas of interest, I’ve learned that, in fact, the plane ride itself is emblematic of the Israel experience.

I’ve spent my days learning at BINA’s South Tel Aviv-based secular yeshiva, applying ancient Jewish texts to our understanding of contemporary Israel. The gap year program attracts international students and Israelis alike, all interested in creating a rich relationship with Judaism outside of its traditional religious expressions. We then apply our studies in the classroom to our neighborhood of South Tel Aviv, working and learning alongside African refugees and immigrants.

I don’t remember where I came across the quote “the next big thing will be a lot of small things,” but this simple statement has become incredibly relevant during my past few months in Israel. The idea that life is simply a collection of moments is not an original one, but I’ve come to understand that the clichés you find as the catchphrases of quirky boutiques are often just as wise as the quotes you find in the classics.

When selecting the right gap year for me, I found myself focusing on the “next big things” – the hours I would spend in the classroom poring over Jewish texts with which I’d never quite been able to connect, the volunteering experience in schools that need an extra hand and the effort I’d put into learning Hebrew.

But I have found that the heart of Israel is most present in my local falafel joint. And in the feeling I get every Saturday when my world reminds me to sleep in and take it slow. It’s in the smell of sunblock, sunflower seeds and the Mediterranean. I find it in the bus ride to Jerusalem, and the graffiti of Tel Aviv. It’s in Israel’s national anthem, “Hatikvah,” and in the Israeli radio show “Galgalatz.”

And as I’ve come to develop a more complex and complete relationship with Israel, I also recognize that Israel’s heart is sometimes present within my apartment’s bomb shelter and at border control. It’s in my friend’s army uniform and the sound of a siren.

My time spent in Israel has not brought clarity, only more confusion. I often find myself defending and attacking Israel in the same sentence. I recognize the overwhelming beauty, and hurt, in the history and people of Israel. I realize that the Israeli flag can represent both pride and pain.

My confusing first two months in Israel have been illuminating. I initially came to Israel exploring and pursuing answers, but I now strive for improved questions. Israel has forced me to abandon my certainties and embrace ambiguity. The very things that make the Israeli experience difficult also make it enormously rewarding.

The true Israeli experience is made up of a collection of moments – moments that will challenge and change you. Moments that celebrate the color and complexity of life.

This place is special – you’ll know it from the moment you step on the plane.