As we’ve entered into our last three months of mechina, there has been a big change in our routine.

Most of the responsibility of coordinating our schedule has shifted from the staff to us, and we’ve already planned several trips and seminars for our group. The change in pace has been exciting, and given us a chance to reflect on everything we’ve learned throughout this year and how we can apply it when developing our schedule for the coming months.

In early April Israel observes a week of exploring the Diaspora and Jewish Peoplehood, which was the perfect opportunity for our LEAP group to dive deeper into Israel’s relationship with Diaspora Jews, and to take the reigns in order to share the things we have learnt together this year with the rest of the Israelis on our program. 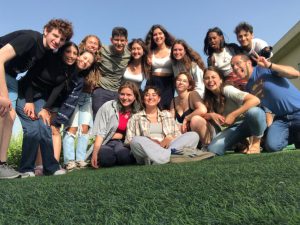 We started the week with two days at Kibbutz Hanaton in the north, where another mechina is also located. The location was so beautiful and full of nature, and the peacefulness was the perfect way to return from a weekend. We had several classes during our time there, focusing on story-telling and how we can share messages about our lives as Diaspora Jews with Israeli Jews throughout the week.

We also met with several people who live on the kibbutz and work at the mechina there, and got to hear about their life stories. It was very eye-opening, since they all identified with different Jewish denominations, and experienced different religious influences growing up. The speakers shared with us the process of how, in their adulthood, they made the conscious decision to build a certain religious or non religious environment in their homes based on their childhoods and their partners’ experiences within the religious world. It was interesting to see how people split off from the religious denomination they were brought up in because of their experiences post-high-school, and it showed me how many aspects of Judaism I still want to experience and how valuable it is to hear about them from people who actively choose to make those aspects a part of their everyday lives. 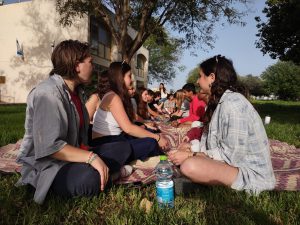 On Tuesday, our mechina spent the day at Jerusalem, learning about its history and about Jewish peoplehood in a broader sense. We started our morning with a walking tour of Jerusalem. Something interesting that our tour guide said was that the concept of different Jewish denominations is a very European Ashkenazi thing. She continued that in Israel, certain parts of Jewish culture and experience are chosen for us, like places being closed on Saturday and having days off for Jewish holidays. But to be a part of Jewish culture, you need to get up every morning and choose to be a part of it. And this stood out for me because, growing up, I was never actively a part of Jewish culture, except for celebrating Jewish holidays with my family. Spending my gap year in Israel has shown me how many experiences you can be a part of as a Jew, and how it is now my responsibility as I enter adulthood to choose aspects of this religion which I want to be a part of.

We ended the day with a tasting tour in the area near Mahane Yehuda Market. Our tour guide made aliyah from America, and spoke about his experience of never feeling like he quite belonged in his American communities, and finally finding a home for himself in Israel, where he immediately clicked with the culture and lifestyle. We got to taste his favourite tacos and empanadas in the country, and the tour provided a really personal look into the experience of living in Jerusalem.

On the last day of Diaspora Week, Sha’anan Streett came in to speak to us. He is part of the Israeli hip hop/funk band Hadag Nahash, and father of Shali, one of the members of LEAP. He told us about his experience growing up in Jerusalem, the link between his political beliefs and his music, and how he chose to raise his children in terms of religious practice. Sha’anan pointed out to us that in Israel, Jews are the majority – we make the rules but don’t necessarily follow them. But everywhere else in the world, we are a minority. He explained that being a minority is part of the Jewish identity, and we should embrace this instead of trying to escape it. When we asked about religion, Sha’anan said that he’s a non-believer. He explained that Jews have thousands of years of wisdom, and that it’s smart to look into this history (instead of ignoring it) and choose the things that are relevant to us and our lives.

One recurring theme that I have experienced throughout this week is the emphasis on the freedom to create your own religious affiliation, and the skill of curating how you want your connection to Judaism to look. Regardless of how I was raised, this year in Israel has been the perfect opportunity for me to learn about the aspects of Judaism I have less connection to, and decide which of them are relevant to my beliefs, and use them to build the identity I want. 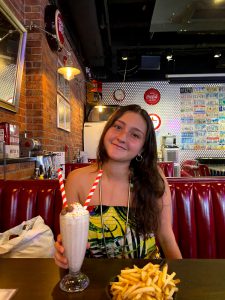 What I Learned in Mechina | BINA Gap Year

At BINA Gap Year, we hope to share a variety of views and narratives surrounding the difficult and complicated things that go on here. Nicole Khaimson reflected on this trip in her latest blog saying: "As a Jew coming to Israel for a gap year, learning about the Israeli-Palestinian conflict was really important to me". […]

According to the classic Jewish tale of Rabbi Hillel, the entire idea of the Torah can be taught in one minute to someone standing on only one foot through the line, "That which is hateful to you do not do unto others”. […]

Leap’s First Shabbat Back in Israel

Leap just had our first weekend back in the mechina since returning from San Francisco, and it was a busy one! […]