When Israel-based nonprofit BINA: The Jewish Movement for Social Change decided to plant its flag in North America, officials rejected cities such as New York and Boston.

Instead, they chose Palo Alto.

The organization, which operates secular yeshivas in four Israeli cities, is offering classes at the Oshman Family JCC as the kickoff to a project it hopes eventually will expand to other U.S. cities.

Zoe Jick is developing BINA’s text-based program of social action at the OFJCC and will be teaching the first four of 13 classes offered from this month through May. She said she considered New York and Boston but chose Palo Alto as the test market while on a trip to the Bay Area.

Initially, “I thought it can’t be in California because Californians don’t care about tradition, they care about progress,” Jick said. “But in Palo Alto there is intellectual curiosity pulsing from every street corner. People are used to holding on to tradition and innovating it.”

Jick, a Boston native, moved to the Bay Area last summer to become associate director of Jewish content at the OFJCC. Before that, she spent two years working at BINA in Tel Aviv, and the year before that as a student there thanks to a Wexner graduate fellowship in Jewish education. That all came after she received a master’s of theology at Harvard Divinity School.

While at BINA, she pitched deputy director Nir Braudo on the idea of expanding the program to the U.S. 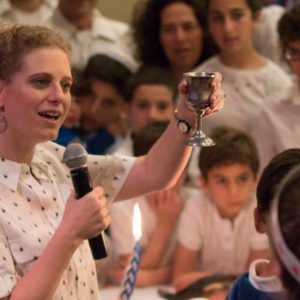 “My dream has always been to open a secular yeshiva in America. I got the skills to do that by working at BINA, but all of BINA’s programs were in Hebrew,” she said. “I said to Nir, over a bowl of hummus, that there are Americans that would want this experience, but their Hebrew is not strong enough to do it [in Israel].”

The term “secular yeshiva” sounds like an oxymoron. Or is it?

BINA, the Hebrew word for wisdom, bases its philosophy on three pillars — text-based learning, social action and community. In Israel, it provides a pluralistic alternative to the dominant Orthodox structure.

“We see ourselves as a service provider, as an organization that wants to give the secular people a Jewish home that they feel is part of their values,” Braudo said in a phone interview from Tel Aviv. “Most of the organizations here are Orthodox, while the majority of the population is secular. This is where the young Israelis are.”

In Palo Alto, the pillars of the BINA program will be highlighted by applying text-based learning to social action and community building that already exists. “When it’s done right, infusing the social justice work with language and learning really makes it very Jewish,” said Tova Birnbaum, the OFJCC’s director of Jewish content.

“There was always conversation around how do we make meaningful Jewish experiences for people who are not necessarily part of any other institution, such as a synagogue,” continued Birnbaum, who herself worked for BINA in Israel for seven years. “[We] really see the JCC as a secular synagogue, a gateway for people who could join the community and have meaningful experiences here. And the BINA philosophy felt like a really good fit.”

The 90-minute weekly classes on Wednesday nights began Feb. 6 at the OFJCC. Thirteen sessions have been divided into three parts — the people (four classes), the books (five classes) and the life (four classes). People can sign up for individual sessions ($18 each, or $15 for OFJCC members and J-Pass holders) or for each part ($50).

Both Jick and Birnbaum, who first met when both were working at the World Zionist Organization in New York, credited Zack Bodner, the OFJCC’s chief executive officer, with having the vision to forge the collaboration with BINA.

“It is important for all Jews to engage meaningfully with their Jewish identity and heritage, whether in synagogues, at the JCC, in their homes or out in the community,” Bodner said. “This program creates a new opportunity for those who might call themselves secular, unaffiliated or ‘just Jewish’ to experience deep study of our sacred texts and traditions.”

Braudo said it is important for Judaism’s sacred texts, such as the Torah, to provide guidance to all Jews, not only those who are religious.

Jick insists there is no contradiction in secular Jews using sacred texts to support their efforts at social action and building community, and studying the texts in a non-religious setting makes the process more egalitarian and open to everyone — including non-Jews.

“We don’t see the text as obligating. We see it as inspirational,” she said. “We don’t learn the laws of Shabbat hoping you’ll go home and do them. We’re hoping you’ll understand the tradition.”

For more information about the BINA program at the OFJCC, visit www.paloaltojcc.org/Jewish-Life/BINA/Study or send an email to Tova Birnbaum at tbirnbaum@paloaltojcc.org.