According to the classic Jewish tale of Rabbi Hillel, the entire idea of the Torah can be taught in one minute to someone standing on only one foot through the line, "That which is hateful to you do not do unto others”. While the learning of the Torah's ideas may only require one foot, the work of putting these principles into action requires both. 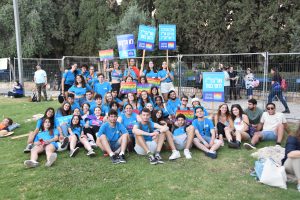 Self love and acceptance

While BINA is not a Queer organization per se, BINA is an organization that stands for equality and rights, and thus Queer values and rights. Being a part of BINA, as participants in BINA Gap Year, has helped us to explore both our Queer and Jewish identities together, as well as the intersection between the two. This exploration has been supported through activities such as Tanakh and Talmud lessons focusing on LGBTQ+ issues, activities including a group visit to The Castro (San Francisco’s Queer district) during our LEAP trip to California, and many discussions with friends and teachers. In particular these values have been explored through education from our LEAP coordinator, Elliot Glassenberg. Through his lessons he instills not only Jewish wisdom, but also values of self-love and acceptance. These lessons are taught through a unique lens blending Queer history with narratives which are not often told.

This past week, in a very real way, we had a chance to put these values and lessons into action through our collective mechina participation in the Jerusalem March for Pride and Tolerance. There, we marched not only for our own values as individuals, but for our community’s values of equity and respect. 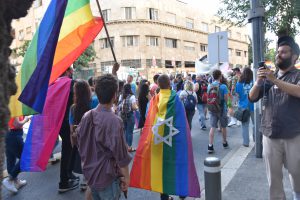 Pride is marked by rainbow kippahs

When we were first told that we would be marching as a group, in our BINA t-shirts, many of us saw this uniform as a little pointless or silly. However, sitting gathered in the train station in Jerusalem, looking around, the power of this action became clear. Seeing each person not only wearing the same shirt, but doing so each in their own individual way made a strong statement not only about us as individuals but also about our collective power as a group. Throughout the march, the BINA t-shirts served as a constant reminder that we are not alone in this ongoing fight for safety, freedom and respect as LGBTQ members of society. We are fighting as a community.

While Tel Aviv Pride is often described as more of a celebration, the march through Jerusalem takes on a continued tone of defiance. There, Pride is marked by rainbow kippahs and headscarves, making it clear that the fight for equality is not only a secular value, but a Jewish one. Most importantly, though, it is a value that we, the BINA community, will continue to fight for.