Parashat "VeYechi," closes out the book of Genesis, and the string of family dramas of the fathers and mothers; a summarizing portion, closing a variety of narrative threads, among them the life of Jacob, as his sons gather around his deathbed, and a summary of Joseph's life. The end of the book of Genesis invites us to take a bird's-eye view of a book that begins with the creation of the world and humankind, and through the realization of humankind's purpose in light of the many stories and blessings – a full life, from birth to death told with a great deal of humanity; stories from which each of us can take something and find an echo of his or her family. The end of Genesis also marks the transition from a family story, to a much broader story of a people. Jacob's family expands to the tribes of Israel, who leave the Promised Land behind for Egypt. At the beginning of the book of Exodus, Pharaoh is the first to put his finger on the transformation – from individuals to "the people of the children of Israel." Or, in the words of the poet Amir Gilboa, "suddenly a man arises in the morning and feels that he has become a nation, and begins to walk."

Moments before his death, Jacob asks Joseph to bury him in the Cave of Patriarchs alongside Leah, his first wife, and thus to "return to his forefathers" and be linked in the chain of the generations that preceded him. The Cave of Patriarchs lies ahead of him, but moreover he is concerned with what he will leave behind him, with his gaze fixed upon the generations to come. First, he summons Joseph and his sons, Ephraim and Menashe, so that he can bless them, and afterwards he blesses each of his sons with his own special blessing that transforms them from individuals to collectives, or communities, within the Israelite nation.

Now, your two sons, who were born to you in the land of Egypt before I came to you in Egypt, shall be mine; Ephraim and Manasseh shall be mine no less than Reuben and Simeon. But progeny born to you after them shall be yours; they shall be recorded instead of their brothers in their inheritance.. .  Noticing Joseph’s sons, Israel asked, “Who are these?” And Joseph said to his father, “They are my sons, whom God has given me here.” “Bring them up to me,” he said, “that I may bless them.” Now Israel’s eyes were dim with age; he could not see. So [Joseph] brought them close to him, and he kissed them and embraced them . . . But Israel stretched out his right hand and laid it on Ephraim’s head, though he was the younger, and his left hand on Manasseh’s head—thus crossing his hands—although Manasseh was the first-born . . . When Joseph saw that his father was placing his right hand on Ephraim’s head, he thought it wrong; so he took hold of his father’s hand to move it from Ephraim’s head to Manasseh’s. “Not so, Father,” Joseph said to his father, “for the other is the first-born; place your right hand on his head.” But his father objected, saying, “I know, my son, I know. He too shall become a people, and he too shall be great. Yet his younger brother shall be greater than he, and his offspring shall be plentiful enough for nations.” So he blessed them that day, saying, “By you shall Israel invoke blessings, saying: God make you like Ephraim and Manasseh.” Thus he put Ephraim before Manasseh. 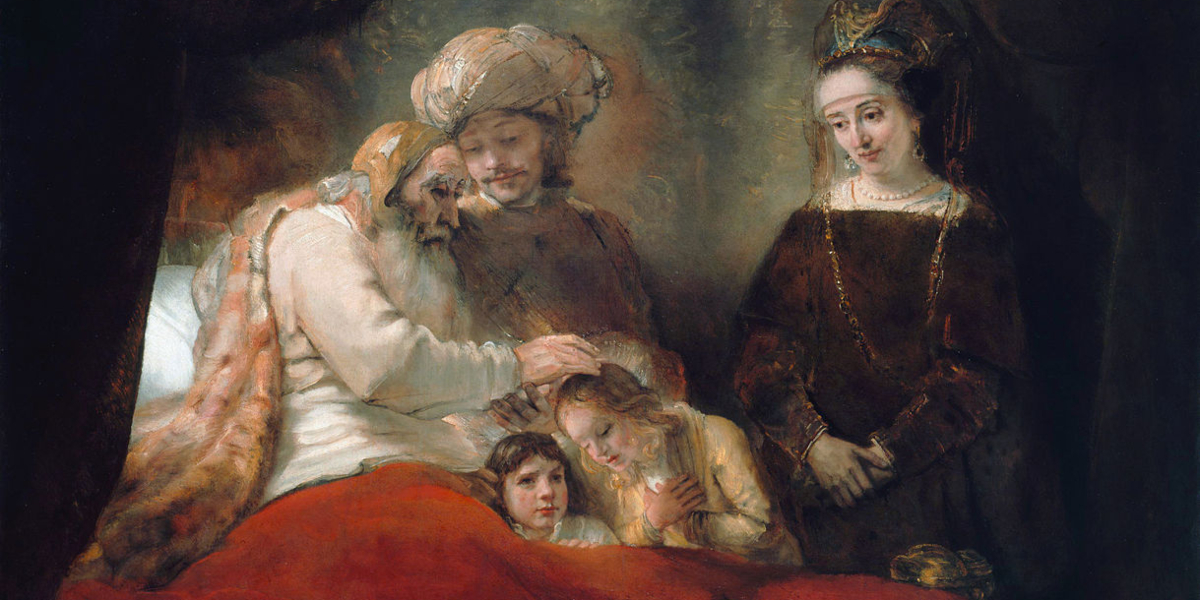 Ephraim and Menashe, Joseph's two sons, receive the blessing from Jacob, their grandfather, as if they were his sons; Jacob pulls the same stunt with them that he pulled with his brother Esau and the blessing of the firstborn, when Rebecca took the two brothers to receive the blessing of their father Isaac. This time, Jacob acts intentionally, giving the higher blessing to the younger son, and predicting that Ephraim's seed will be more fruitful and plentiful than that of his elder brother Menashe.

Jacob does not ignore the standing of the firstborn in the family, and so places Ephraim and Menashe on the same standing as his sons Ruben and Simeon, and asks to bless them as if they were his own sons. In addition, he inverts the hierarchy and gives Ephraim, the youngest, the higher blessing. We must ask, to what extent did Jacob choose freely to act, perfectly in line with his own experience, as learn from his mother, Rebecca? Was it truly prophesy that compelled him to favor the seed of Ephraim, or did he simply not know any other way, based on his experience during childhood?

Many theories and stories have been written about the family, both as a meaningful institution that influences the social order and enables processes of socialization between the home and the world outside, and also as a platform from which one can create change that begins in the family, and grows beyond to the community and society at large.

This week, Prof. Ruhama Weiss led a delegation of Israeli women and men to Cyprus, to support a British woman who claimed to have been raped by twelve Israeli young men at a resort last summer. The charges against the Israelis were dropped, and the young woman was charged with filing a false complaint. Dr. Weiss was motivated to travel to Cyprus by personal experience, and her experience expanded to a "tikkun" (repair) of society.

"If my stomach has been churning for this long, it means I must make a decision. When this happened to me, no one believed me, no one was there for me. I want to say that this will not happen again. This is the vow I made to myself and to the coming generations. We must be there to say that women will no longer be silenced," Prof. Weiss said.

Parashat "Vayechi" does not seek only to deal with the deaths of Jacob and Joseph, but rather asks to focus on blessings, and the possibility to expand and grow. It invites us to ask what our blessing is in the face of the social processes taking place in the reality around us. Where must we open our arms to bring about change and choose what's right?

Ali Goldberg, a participant on the BINA MITF TLV + Bet Shean, reflects on her experience in MITF, and her southern adventure in Mitzpe Ramon. […]

Sophie Riess, a participant on the BINA GAP Shnat Sherut year, reflects on her experience in GAP Shnat Sherut, communa weekend and a special way to celebrate a birthday. […]

Ayala Dekel, a teacher and educator at BINA, discusses this week's parasha, Va’Era […]

Crises as an Opportunity for Heart-to-Heart Conversation | Parashat Vayehi

Avrahahm Eisen, BINA's Director of Education, discusses the importance of hope and family in this week's parasha, Vayehi […]

After the Coronavirus pandemic began in the US, I was eagerly awaiting my arrival to Israel even though I knew that there was an impending 14-day quarantine that I would do once I arrived in Israel. […]