I want to talk about the reality of Jewish guilt, specifically the way it relates to self-expression. Jewish guilt is a common feeling experienced by Jewish people questioning their religious and cultural identity. As someone who grew up in the modern-Orthodox community, I experience it all the time. I no longer identify with Orthodoxy, but I still sometimes feel guilt for not following halacha (Jewish law). Over the last couple of years, I have worked a lot on my connection to Judaism and relinquishing the sense of responsibility to Jewish law that I have always felt. I’ve found that gaining a better understanding of myself and what I believe is what’s important when it comes to connecting to Judaism. It has helped me get past the need for following every rule to feel like I’m practicing Judaism “correctly.” Nevertheless, my Jewish guilt is able to push its way through my mind and torment me for the way I practice Judaism today. 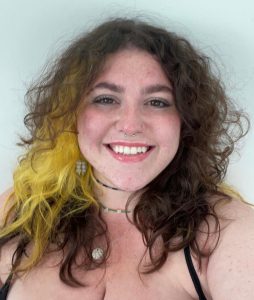 gaining autonomy over my clothing

Self-expression is one of my biggest points of internal contention because of the Jewish guilt I’ve experienced in my life. From 1st – 12th grade, I had to wear either a uniform or follow a strict dress code for school, which required me to wear a skirt to or past my knees and anything less than short sleeves was unacceptable. Until I graduated high school, I only owned two pairs of pants: one pair of cheap jeans and one pair of yoga pants that I stole from my mom. When I was preparing for my gap year, it was the first time in my life that I could fill my closet with whatever clothes I wanted. It took several months until I owned my very first tank top, but living a life in which it was even worthwhile to own a tank top felt so freeing. I was finally able to find confidence in myself because I had autonomy over the clothing I wore.

However, my shift to wearing more “revealing” clothing (even though I don’t consider spaghetti strap dresses to be revealing) – sometimes gave me a sense of guilt. I spent my gap year living in Jerusalem and whenever I saw my friends that were on seminary programs, I felt a little ashamed of my choice of dress. It was almost as if I wasn’t dressing the “Jewish way” and it made me feel bad about myself. It didn’t make sense to me – I had never felt so positive about the way I dressed and presented myself, yet I felt bad. That’s Jewish guilt. I didn’t – and don’t –  truly feel this way; I was not ashamed of my appearance or the clothing I chose to wear, but some religious guilt was able to push its way to the front of my mind. Thankfully, I was able to work through this sense of guilt I felt over my clothing choices. 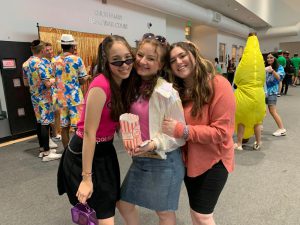 Since gaining freedom and independence over my self-expression, I’ve acquired two nose piercings, six more ear piercings, yellow hair, and two tattoos. I currently feel like my most  authentic self. When I’m walking down the street, people around me are able to understand a bit more about me and my personality – which was never the case in high school.

While I don’t regret any of my decisions, the tattoos were really a struggle for me. I knew I wanted to get a tattoo as early as the age of 13. Getting a tattoo was not an impulsive decision, but one that was well thought out over the course of several years. Still, it was really difficult for me to bite the bullet and get tattooed because of my Jewish guilt. I even made a deal with myself that every tattoo I get will be full of meaning to appease my Jewish guilt and make me feel not as bad about my decision to get tattooed. It’s a deal I’d like to break, as it holds me back. 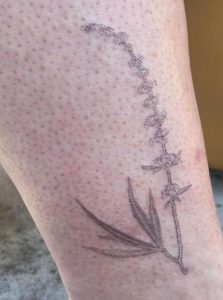 The importance of self-expression

It’s kind of ridiculous – or at least I think it is. The number of tattoos on my body or the amount of tank tops I wear does not determine my level of Jewishness. It does not change the fact that I grew up surrounded by Jewish culture and am descended from generations of Jewish people. I still study Torah and practice my Hebrew, as well as celebrate Jewish holidays and discuss Jewish values with my peers. But, I don’t even need all of that to be Jewish, or to be a “good” Jew. I have come to understand that I have nothing to prove! My appearance does not determine the entirety of my identity or how “good” I am at holding to different aspects of my identity. There is no one way to be anything, which is something I am continuously reminding myself. I believe that gaining autonomy over your appearance and allowing for self-expression is the best way to connect to your identity, including your Jewish identity. Yes, this could be in the form of a Judaism-related tattoo or jewelry with Hebrew engravings; but moreso, when you feel like your truest self, you can find your truest self and your real and strong connection to Judaism. It also opens the door for so many other people struggling with Jewish guilt because of the way they want to express themselves. I’m proud of the confidence I have gained over my appearance and my new Jewish identity. My hope is for more people to gain this type of confidence and feel true to their identity, no matter how different it may be from the way they grew up and eliminate the power of Jewish guilt.