In the summer of 2018, over 81,000 kids attended Jewish sleep-away camps in North America. Why are so many kids drawn to leaving their home for 2-8 weeks at a time, starting as young as 9-years-old? Why are parents willing to spend thousands of dollars for their kids to go to these camps? In this article, I will be exploring the purpose that Jewish summer camps serve through the experiences and perspectives of those that have attended camp for many years, including my own.

Jewish camp has the power to become a foundational part of one’s Jewish connection. I went to Camp Stone, a modern-Orthodox B’nei Akiva camp in Pennsylvania, USA. It very quickly became a second home to me – from zip-lining over the lake to dancing and singing my heart out on Friday nights, Camp Stone played a huge role in my personal growth and making me who I am today. Not to mention, after five years since being a camper, I still talk to my camp friends on a regular basis and plan on seeing them during my time in Israel.

I grew up in a very Jewish area and always attended Jewish day schools. While camp played a huge role in my Judaism, I didn’t rely on it for my connection to Judaism. I wanted to ask some friends of mine who did not grow up in strong Jewish communities about what camp meant and continues to mean for them and their Jewish connection. 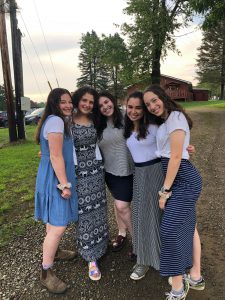 Tamar Yahalom is a 20-year-old from Dallas, Texas and is now living in Israel and serving in the IDF. She attended public school her whole life and did not live in a large Jewish community. At the age of 12, she began attending Camp Stone and continued as a camper there for four years. She then returned to work at Camp Stone for a subsequent two years.

“Camp provided me with a space to explore my Judaism in a comfortable and welcoming environment. It also connected me with other young Jews from all over the country and the world, which was vital to my Jewish

journey as someone who grew up in predominantly non-Jewish

Jewish summer camp gave Tamar the Jewish community she didn’t have at home – a community that can now exist for her in so many different places. A huge benefit of going to a Jewish summer camp is getting to meet Jews your age from all over the world. Because of Camp Stone, Tamar has friends spanning from multiple area codes and continents, from Palo Alto to Zichron Yaakov. 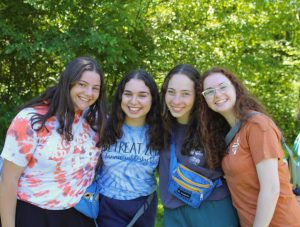 Elan Roth, a 20-year-old from Westchester, New York, spent several summers at NJY Camps. Elan grew up in a non-particularly religious home and attended public school for almost the entirety of his educational career. For Elan, camp made Judaism inviting and exciting.

“Camp brought a positivity and excitement to Judaism that Sunday School and High Holiday services failed to provide. The energy and happiness

present at a Friday night service by the lake or banging of tables during Birkat Hamazon, the usually mundane blessing after a meal, is

NJY Camps allowed Elan to build a deep connection to Judaism that he wasn’t able to build at home. It created a space in which he could learn about Judaism and have fun in the process. Jewish summer camps provide a space in which campers can connect in a way that makes sense to them. These camps make kids excited about Judaism, creating a strong desire to connect to their Jewish identity and to stay connected. 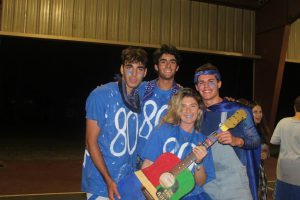 There are so many types of Jewish camps. Many are religiously based, but there are several camps that are not. For example, Eden Village Camp (EVC) is a farming camp whose values are based in sustainability, inclusion, and community. This camp focuses on the culture and

values of Judaism through a pluralistic lens. Eden Barak, a 19-year-old who grew up in Teaneck, New Jersey, shares her experience at EVC and its impact on her Jewish connection:

substitute of the traditional morning davening…”

When talking about Shabbat, Eden shares: “[I]t was a time where everyone would dress in white, we’d have a parade all along the campus, and we’d do Kabbalat Shabbat in the woods under the stars.”

As far as Jewish learning went at EVC, “[W]e learned from Jewish texts, but they always used sources from very different rabbinical perspectives, and they told us it was our job to figure out which we connected to for ourselves.”

Overall, EVC gave way for Eden to love her Judaism even more than she did before and taught her the importance of “ learning new ideas and facilitating an ever-changing Jewish identity.” She gained the abilities to make Judaism her own because of EVC.

Eden Village Camp provides campers with a unique way to connect to their Jewish identities. There is no set way that EVC believes Judaism should be practiced. Because of this, the camp is able to inspire so many young campers to form a deeper bond with their own Jewish identity. 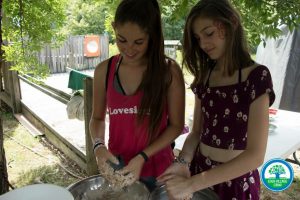 The benefits of Jewish summer camp

All in all, camp is a place for Jewish growth. It gives every camper a space to explore Judaism in an enriching environment. For many campers, it’s the only chance they get to be surrounded by Jewish kids in a Jewish environment. It provides community, activity, education, practice, culture, history, values, and so much more. Jewish summer camp gives

Jewish kids an experience that can’t be replicated anywhere else. Living with your peers also creates a great opportunity for campers to learn about how their new friends practice Judaism. It can provide so many opportunities to expand a kid’s knowledge and understanding of themselves and how they can be Jewish. For all these reasons and so many more, Jewish summer camp is incredibly beneficial for Jewish children and their religious development.